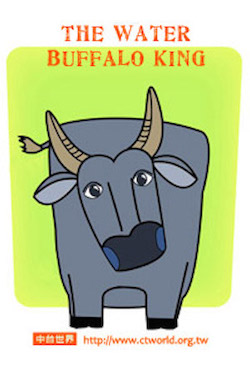 A long time ago, there lived an extraordinary water buffalo king. He had a remarkably solemn demeanor, was very kind and gentle, abounding with sympathy and compassion, and had very high morals. Because of these fine characteristics, other water buffaloes would in great numbers approach him to pay their respects and to honor him. One day, the water buffalo king and his followers went down to the riverbank in order to eat the luscious green grass that grew there. When they discovered how spacious the area was, allowing plenty of room for the water buffaloes to roam around comfortably, they ended up settling down there to live.

Next to the river lived a macaque monkey, and on one occasion he came down to where the water buffaloes were living. When he saw the water buffalo king, he took notice of his extraordinary behavior, with his very serene nature, and surrounded by numerous followers. Seeing this made the monkey very envious, and so he started shouting all kinds of abuse towards the king. As well, he picked up stones off the ground and started throwing them at the king. He finally shouted at the king, “You get out of here! This is my territory! Take all of the other water buffaloes and leave this place at once!” After observing the situation, not only did the king not retaliate, but his heart remained free from anger. Maintaining his calm composure, he silently received all that came upon him.

A short time later, another group of water buffaloes came over to this area. When the monkey saw them, he, like before, started yelling words of insult, and again picked up rocks from the ground and threw them at the group of water buffaloes. But having witnessed the forgiving behavior of the buffalo king, they became full of respect and emulated his spirit of tolerance and acceptance. They also did not bring rise to an angry mind, instead only quietly left.

At a place not far away, there was a young water buffalo that had strayed from the herd, and was very anxious to catch up with the others. When he witnessed what had just happened, with the monkey’s angry abuse and his rock throwing, a feeling of vengeance overcame him, and he wanted to fight back. But then he thought, “The elder buffaloes ahead of me were able to keep their minds undisturbed and calm, and refrained from harming their attacker. Since I am still quite young, I should follow their example of remaining calm, and not bother myself with this mischievous monkey.” So the young buffalo paid no attention to the monkey, and hurriedly continued on his way.

After walking for a short period of time, the king passed a grove of trees, and amongst these trees lived a tree god. Upon seeing the king, the tree god curiously asked, “I saw that monkey behaving so unreasonably towards you, cursing and throwing stones. Due to your great strength, you definitely wouldn’t have had a problem in dealing with him. So why didn’t you fight back? Instead you were silent and did not respond to him.” The king answered, “Everything in the world is subject to the principle of cause and effect. That monkey shouted abuses at me, and he will in the same abusive way treat other animals that he comes upon. But one day when the fruits of these bad deeds ripen, he will then have to face the bad consequences to his actions. Seeing him so ignorant of the law of causality and continuously doing bad things, I can’t let my compassion go out to him soon enough, how could I possibly have the heart to hurt him? Furthermore, if I really did do something to him, because my strength is so great I would surely in an instant take his life, which would therefore result in me being subjected to evil retributions in my own future. Where is the good in all of that? So we can see that maintaining self-control is really the best protection for one’s own life.”

This water buffalo king was actually Shakyamuni Buddha in a previous reincarnation. Because Shakyamuni Buddha always practiced patience, tolerance and compassion, keeping his mind calm and undisturbed by any conditions that came upon him, he was finally able to reach complete enlightenment and attain Buddhahood. ⌘

Patience and tolerance can extinguish one’s anger, and increase one’s concentration and wisdom. When the people around us see how patient and calm we hold ourselves, we radiate a positive influence on them through our virtuous conduct. In this inconspicuous way, we are practicing the Bodhisattva’s path.