Translated from Sutra on Various Metaphors 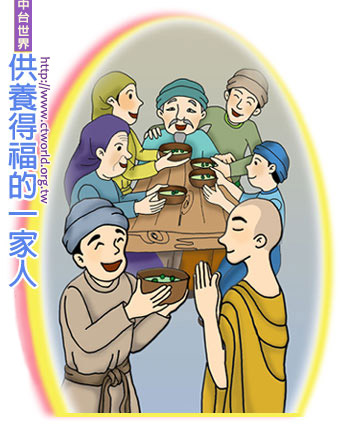 During the time of the Buddha, there was a very rich family whose six members were not only happy and harmonious but possessed great wealth and innumerable servants.  Their magnificent house was furnished with luxurious carpets and their exquisite utensils were made of silver, gold, and lapis lazuli.

One day, the Buddha and Ananda were begging for alms in town. When they came to this family’s home, the family members were delighted and begged the Buddha to accept their offerings. When Ananda saw the wonderful affluence that this family enjoyed, he was very curious and asked the Buddha, “What conditions caused this family to enjoy such wealth?”

The Buddha told Ananda, “In a past existence, the master of this house was very poor. One year, there was a famine in the village. Since there was a shortage of food, the villagers had to gather plants by the river to feed themselves. One day, the master of the house picked some river plants to make soup. When the whole family was just about to eat, a sramana (ascetic monk) was begging for alms outside their house. The parents of the family said, “Let us give him our portion!”

Because of their sincere and pure dana, at the end of their lives, the members of this family continually enjoyed the blessings of the heavenly and human realms, with peace and happiness life after life.”

When this family heard the Buddha’s words, they all resolved to take and uphold the five precepts. At the end of their lives, this family immediately ascended into the heavenly realms, enjoying infinite blessings. ☸︎

Greed is the root of all misfortune. Dana (Giving) is the way to eradicate desires. In “The Treatise of Great Wisdom” it says, “To give away what you treasure, you earn the utmost blessing.” When one sincerely makes an offering to the Three Jewels, one plants the seed of liberation. When the seed turns into the fruit, one is able to see the truth and reveal infinite blessings and wisdom.