The Tale of the White Elephant 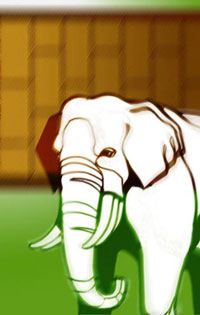 In a forest long ago there was a white elephant king with six tusks who led a herd of 500 elephants. The white elephant took the Three Refuges and vowed to assist all sentient beings to attain enlightenment. He had two wives, one of the wives was jealous of the other receiving more attention from the elephant king. She made a curse to destroy the elephant king in the future. Plagued by jealous and upsetting thoughts she soon passed away and was reborn as a smart and beautiful lady who was soon married to the King.

One day the queen told the king that she had dreamt of a white elephant with 6 spotless tusks, and she would rather die than not owning those tusks. She became so frail from this obsession that the king gathered all the hunters in the kingdom to search for the six-tusked elephant to fulfil the queen’s desire.

One of the hunters followed the queen’s directions and disguised himself as a monk. Seeing the monk, the elephant paid his respect and let down his guard. The hunter then captured the white elephant in a pit, severely wounding him. Before dying the elephant king asked the hunter why he wanted to kill him and was told about the queen’s order.

Although in great pain, understanding their karma, the elephant king told the hunter: “Take the tusks and leave, I vowed to practice the bodhisattva way and I am committed to it.” The hunter retrieved the tusks and followed the instructions from the elephant king to clear his footprint traces so other vengeful elephants wouldn’t hunt him. He then collapsed and died. The white elephant king is one of the Buddha’s previous incarnations. ☸︎

No matter who or what we are, which realm or world we are in, we can always do something to benefit others. Once we have made the vow to practice the Bodhisattva’s Ways, we must aim to uphold the Three Refuges and the Five Precepts, to practice the Ten Good Deeds and the Six Paramitas (The six practices of the Bodhisattvas - Giving, Moral Conducts, Tolerance, Diligence, Meditation, and Prajna Wisdom) life after life. Only with such unwavering resolve and steadfast determination can we complete the Bodhisattva’s Path and realize supreme Buddhahood. ☘︎