Sending Sweet Water to the King 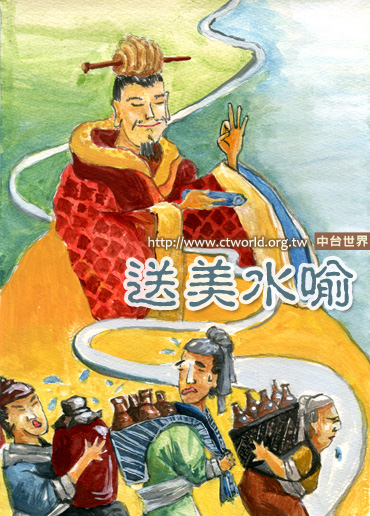 In a village about one hundred kilometers from the King’s palace, there was a spring which provided sweet drinking water.  At the King’s order, the villagers had to carry some of this water to him everyday.  It was hard work and the villagers began to think they should move away to escape the tiresome burden.

But the mayor of the village said to the villagers, “Don’t you go away.  I’ll report to the King and suggest that the distance be shortened from one hundred to sixty kilometers.  Then when you carry the water to the King, the distance would be shorter and you would not feel so tired.” So he went and reported to the King who agreed to shorten the distance as he had suggested.

When the villagers heard the “good news,” they were elated.  Someone pointed out, “Nothing has been changed, the distance remains one hundred kilometers.”

Although the villagers heard this comment, they persisted in carrying water to the King, thinking what the King said must be true.  ☘︎

Why does the mayor suggest reducing the distance, even though nothing will really change? The Buddha is like the mayor. He knows that sometimes we find the practice very difficult. It seems that becoming a Buddha is an impossible goal. So out of compassion, he offers us expedient means like chanting a Sutra or mantra, meditating, or doing good deeds. By practicing diligently, even little by little, we can attain ultimate enlightenment.