Translated from A Collection of Parables – Scroll 1 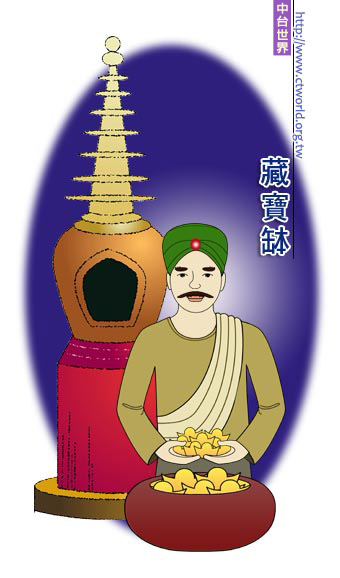 Once upon a time, there was a businessman.  He was very good at doing business.  After a few years, he made a lot of money, as well as gold, silver, and other treasures.  The more money he had, the more he worried about where to store it.  He thought about it everyday.  He came up with many ways of storing his treasure.  First, he thought about burying it under the ground.  He was afraid of rats might carry it away.  Then he thought about hiding it in the swamp.  Then he was afraid that foxes or other animals might take it.  Finally, he thought about letting his wife or brothers take care of it.  He couldn’t do that either. Why? Because he was afraid that his wife or his brother may steal the treasure.  He kept thinking about it day after day.  He couldn’t come up with a good solution.  So, he carried the heavy load of treasure with him day and night.  He never let his treasure out of his sight even for a short moment, because he was afraid that as soon as he left it, his treasure would be gone.

After a while, the businessman found out that some of his neighbors who believed in Buddha often brought flowers and incense to the Monastery.  When they came back, they were all happy.  He wondered why.  One day, he followed one of his Buddhist neighbors to a pagoda.  In front of the pagoda, there was a giant pot.  After the disciples put their palms together and walked around the pagoda, they put all their money and treasures into the giant pot.

The businessman was confused, so he asked the master who stood next to him: “Master, why do they put all their money and treasures into the pot?”  The master answered: “It’s called Charity – giving without expectations.  Other names are, “Forever Storage” or “Never Rotten!”  The businessman thought that he had been worrying about storage his treasures for a long time.  However, nobody could escape from death, no matter how much money you had, you could never keep it forever.  He said to himself, “If I could offer all my money and treasures to Buddha, Dharma, and Sangha to benefit the majority of people, this money could actually come to life.  This is the storage I’ve been looking for.”  So the businessman happily put his money and treasures into the giant pot.

The master blessed him immediately.  The master also told the businessman that the benefit of charity will never be taken by flood, nor by fire, neither by thieves.  Even time could not wash it away.  People who do charity will benefit from it life after life.  He would gain thousands and thousands of times the benefits than the amount he gave away.  He would also have peace and happiness within the Dharma. Once he heard this, all his worries were gone.  He achieved the stage of Srotaanna, or stream-enterer.  ☸︎

“To do good is the greatest joy.” Money and possessions do not last forever; they are merely part of a materialistic life. Our pure, unmoving mind, our mind of wisdom and compassion contains endless wealth, which is even beyond spiritual life.
The most important thing in charity work is not the amount of money, but that the charity work is done with a pure mind, a sincere mind, a respectful mind, an equal mind and a grateful mind. If we have this mind when doing charity, the merit is unimaginable.