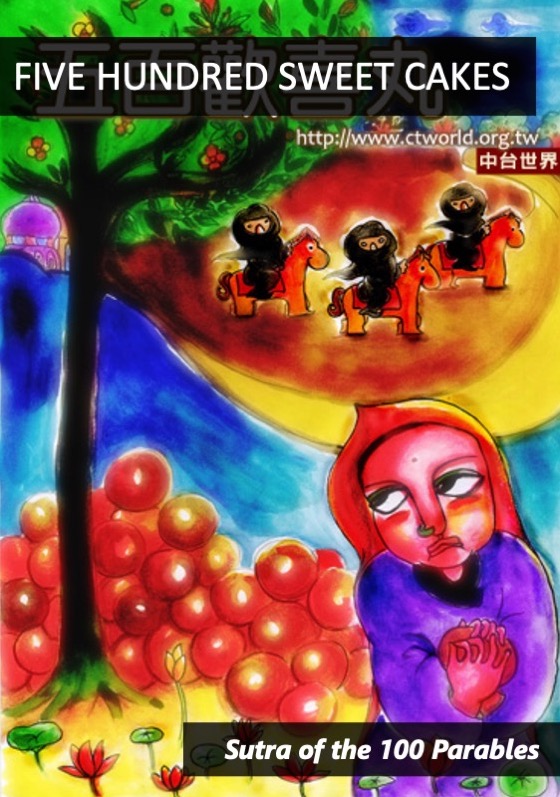 Once there was a woman possessed by a great lust.   She hated her husband and had planned to kill him, but she never succeeded.   One day, she saw her chance when her husband was appointed envoy to another country.  She made many poisonous sweet cakes and told her husband, “Honey, since you are going to have a long journey to a distant country, I have made five hundred sweet cakes for you.”

Her husband believed in his wife’s sincerity, so he took the cakes and  left on his journey.  After he crossed the border, it became dark.  He decided to spend the night in a forest.  He was afraid of being attacked by wild animals, so he climbed high up into the branches of a tree to sleep.  He left the sweet cakes at the foot of the tree, forgetting all about them.  That night, a group of five hundred thieves who had just stolen a great deal of treasure and five hundred horses from the king also stopped by the same tree.   They were all exhausted from running, and felt hungry and thirsty.  When they found the sweet cakes beneath the tree, each ate one without the slightest hesitation.  Because the poison was very strong, the five hundred thieves died at once.

In the morning, the man came down from the tree; with his sword and arrows, he inflicted wounds on the bodies, pretending he had killed them in fighting.  He collected all the horses and treasures and continued on his journey toward the palace of the king. Meanwhile, the King and his officials followed the thieves’ footprints. When they came upon the man, the king said, “Who are you? Where did you get all of these horses?”  The man explained that he came from his country to serve the King as an envoy, and on the way, he met the thieves.  “When I realized what they had done,” he told the king, “I slew all of them and retrieved Your Majesty’s horses and treasure.  I was just bringing them to you now.”  The man noticed the King seemed a little doubtful, so he added, “Your Majesty, if you don’t believe me, please send someone to the place I have described and you will find the five hundred thieves. They are dead beneath the tree.”  Immediately, the King sent some of his trusted men to investigate.  It was just as the man had said.  The King was delighted, so he honored the man with a noble rank, treasures, and land.

However, the officials of the King were jealous.  They began to convince the King that the man was just a foreigner and maybe deceitful.   Upon hearing these words, the man said, “Whoever has the courage to engage me in a contest, go to the open field. I challenge any of you to a battle on the field.”  They were all  silent; no one dared accept this challenge.

Sometime later there was a fierce lion in this same country. The lion killed many people, so the King’s officials suggested the man should kill the lion since he claimed that his bravery was unmatched.  The King agreed and sent him off with a specially chosen sword.

The man was so terrified when he encountered the lion that he climbed into the branches of a nearby tree.  The lion viciously attacked the tree, looking up at the man and roaring.  The poor man was so frightened that he dropped his sword, which fell into the lion’s mouth, killing him at once.  The man was greatly relieved and he returned immediately to the king and assured him that the lion was dead.

From that day on, the king showed him even more favor.  Common people and noblemen, regardless of rank, respected and admired the courageous man.

In this story, the sweet cakes made by the lustful woman symbolize impure giving (giving without a pure mind).  The man represents dharma friends (practitioners). Killing the thieves represents when one attains the realization of a Srotāpanna, killing the five desires and vexations.  Meeting the King implied he met the virtuous ones and sages. The jealous officials represent non-Buddhist practitioners, who often slander those who are wise enough to eradicate vexations and five desires. Although the man was weak and scared, he was able to deal with the obstacles.   Initially, the man practiced giving with an impure mind, but then he met the king who represents virtuous ones and sages, or good teachers. Good teachers lead us to the right place with great skill and help us attain enlightenment.  If even impure giving brings such a good result, when one gives with joy and sincerity, the outcome is even greater.  So the moral of the story is that when practitioners have the opportunity to practice giving, they should practice diligently.

When we first encounter Buddhism, our offerings may be made with an impure mind. Maybe we hesitate to give or are grudging in our donation of time or money. However, this is only the start of our journey and these offerings still bring blessings and merits. As we continue to diligently practice, our mind becomes purer as we encounter good teachers and have more and more opportunities to give. Eventually, we will be free of attachment, free of greed, anger, and ignorance, and our minds will be pure. Therefore, we should make the most of every chance we have to perform charity. ✍︎