The Danger of Indolence 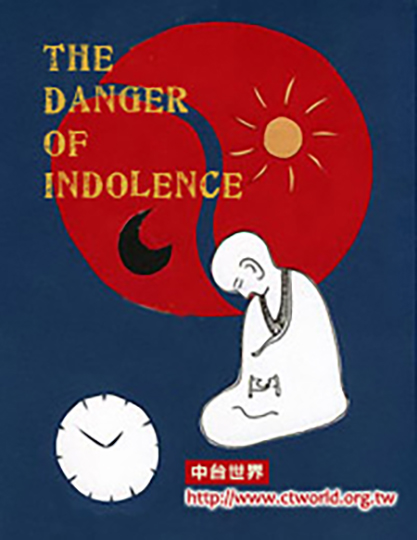 As a matter of importance, the Buddha often exhorted the monks to dedicate themselves fully to their discipline. Nothing is permanent; everything is transitory. And if one is able to transform the confusions blocking one from enlightenment, then one can escape the cycle of death and rebirth, and attain ultimate peace and joy.

At one time there was a monk who, every day after eating sumptuously, would retire to his room for rest and relaxation. Caring only about his own creature comforts, he never really gave thought to any of the Buddha’s teachings, but would pass the whole day in a state of languid idleness. When the Buddha foresaw that this monk had only seven days to live, and might descend into a hell occasioned by his own self-indulgence, he decided to pay him a visit.

When the Buddha came into the room, the monk was as usual dead to the world. The Honored One, seeing his state of unawareness, snapped his fingers to command him to come to his senses, and at the same time admonished, “Get out of bed! You are behaving just like a parasite and a pest. Bodily desires are the root of suffering, but you still crave physical comfort, and live a life of indolence and degeneration. Like someone facing serious danger and injury, but who still abandons himself to idleness, not seeking to save himself. A Buddhist practitioner must always be alert and self-critical. Only by exercising constant vigilance, modeling oneself upon the Buddha, reflecting on the transience of existence and thus breaking free from wrong views, can one be accounted truly wise. If one is devoted fully to the practice, one can attain immeasurable blessings and merits, and forever avoid falling into one of the three wretched realms.

The monk heard the Buddha’s voice and sat up in astonishment. Seeing the Buddha standing in front of him, he prostrated himself. The Honored One next asked the monk, “Do you remember anything about your previous lives?” The monk replied apprehensively, “Your disciple’s mind is clouded in cares and vexations; I cannot comprehend past matters.” In compassion, the Buddha said, “During the time of past Vipassi Buddha, you also became a monk, but not only did you fail to read the Buddhist scriptures and uphold the precepts, you coveted fame, fortune and offerings. You passed your time indulgently, eating and resting as much as you pleased, never contemplated the Buddhist teachings. So after that life came to an end, you spent an eon as a parasite. Next, you spent another eon successively as a sea-snail, an oyster and a beetle on a tree. These four kinds of creatures have minimal awareness,but are self-gratifying, preferring dark places and hating sunlight, sleeping for long periods at a time. In the very same manner you ensconced yourself in bad karma, and never sought to escape this kind of life. Now in this life your depravity has finally been expiated, so you can become a human being, and you are even blessed enough to have become a monk. So why are you repeating your previous mistakes of egotism, idleness and sloth, and bringing upon yourself another descent into the wretched realms?”

Having heard how his indolence had caused him great suffering in the past, the monk felt a chill down his spine and was filled with remorse. From that moment, he dedicated himself body and soul to the practice, diligently ridding himself of all vexations. Eventually, he became an arhat, forever released from the suffering of death and rebirth. ☸︎

Greed, anger, sleep and other vexations are dark clouds that conceal our inherent pure nature. The desire for sleep is the hardest to subdue. Practitioners of Buddhism must regulate themselves both physically and mentally, and honestly reflect whether they have indulged in oversleeping, but at the same time, also being careful not to be too severe and deny appropriate rest. Only by practicing the middle way may one fully reap all the rewards of the practice.