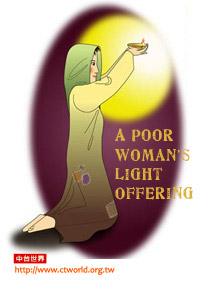 During the Buddha’s time, in the city of Sravasti there lived a poor woman named Nantuo. The only possessions she had were the clothes on her back, and in order to survive she relied on begging for food or spare change. One day, in the midst of a fiercely cold wind, using her weak, trembling hands, she begged for an entire day, finally receiving one small coin. With this coin she could afford to buy a small morsel of food to support her life.

Using that one small coin, she could only afford to buy the smallest amount of the crudest oil, but her sincerity was much brighter than the light emitted from any lamps. When the shopkeeper who was selling the oil saw how Nantou was willing to suffer through another long, cold night in order to make an offering to the Buddha, he became so moved that he couldn’t resist giving her several times more oil than what she had paid for, to help her achieve her dream. As dark descended upon the city, all the townsfolk, from the lords up in the imperial palace down to the commoners on the streets, with their hearts full of sincerity, illuminated their lamps for the Buddha. The lamps dazzled like a sparkling river, and lit up the entire city of Sravasti. The penniless Nantuo was in the midst of that crowd, respectfully lighting her oil lamp.

When this very ordinary oil lamp of hers became lit up in the middle of the night, it was as if her own low and insignificant life was also being lit up. At this moment Nantuo experienced an extraordinary feeling of richness and happiness. As she knelt down to give her offering to the Buddha, Nantuo reflected back not only on her life, full of destitution and suffering, but also thought about all the sentient beings wandering about in the endless darkness of the birth and death cycle. Because of this, she made a great wish: “I wish that this light may pervade through the ten directions, guiding every sentient creature out of the miserable sea of birth and death, to the path of supreme peace and happiness.

With the arrival of dawn, an unimaginable thing happened! All the oil lamps, no matter how precious, were extinguished from burning through the night, or were blown out by Maudgalyayana, who was in charge of keeping watch on the lamps. But the lamp of the poor Nantuo was still shining brightly. Even after exhausting every type of method for extinguishing the light, Maudgalyayana, who had the greatest supernatural powers out of all Buddha’s disciples, still could not put it out. He was astonished: “Whose lamp is this that is still burning? Even with my supernatural powers, I cannot put it out!”

The Buddha, who was present at the time, pointed to the lamp of the poor girl, and with a smile relieved Maudgalyayana’s uncertainty. “Maudgalyayana, the person who offered this lamp made a great vow to save all sentient beings. Even if you used all the water in the four great oceans, you would still not be able to extinguish this lamp. This candle was lit using a great, compassionate vow, and because she was full of sincerity, the light radiating from this lamp is inexhaustible.”

At this moment, Nantuo once again came to the temple, and devoutly paid her respects by prostrating to the Buddha. The Buddha received her and spoke the Dharma to her: “Twenty kalpas from now, you will become a Buddha who would guide an immeasurable number of sentient beings. Your name would be Lamplight Buddha.” With tears of gratitude falling down from the corners of her eyes, thinking about how rare it is to be able to encounter a Buddha in this world, the poor girl knelt down and brought her palms together, requesting permission to leave home and enter the monastic life. After becoming a nun, she thoroughly dedicated herself to progressing on the path, and was deeply respected for her diligence and high moral conduct.☸︎

The meaning of almsgiving cannot be found within the amount of money donated, but only within the genuine and sincere heart with which it is given. When our lives are happy and free from worry, it can be difficult for us to give rise to this fearless mind of giving as well as making firm vows. We should learn from this poor girl Nantuo, that in life we need to diligently cultivate the ways of virtue. Even in our greatest periods of hardship or stress, we still should try to give to the best of our abilities, and make offerings and show our respect towards all sentient beings. With a heart of charity, we can light the bright lanterns not only for ourselves, but for all sentient beings.