Translated from a Dharma lecture by Grand Master Wei Chueh 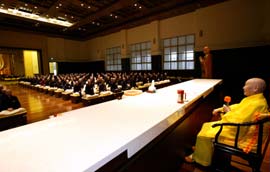 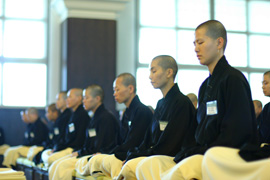 "When one has a mind of perseverance, even those of low faculties can succeed. On the other hand, no matter how intelligent one is, one may not easily attain success. Therefore, in everything that we do, we must be diligent and never regress."

To attain success in our cultivation, we must make unceasing effort both day and night, use this mind of diligence to be mindful of the Buddha, the Dharma, the Sangha, and the precepts, and practice the six paramitas. Besides being diligent now, we must always generate great vow never to regress in this lifetime and future lifetimes, to practice the bodhisattva way—that is true diligence. Just as Shakyamuni Buddha perfected his wisdom, blessings, and virtues for three asamkheya kalpas—that is the greatest diligence.

In a previous lifetime, when Shakyamuni Buddha was the Lo Ji Immortal, he diligently sat in meditation both day and night until “a bird nested on his head, and grass grew up to his knees.” A bird built its nest in his hair and laid eggs, grass beneath him grew up to his knees, yet he remained unmoved. He let go of both body and mind, was tranquil and still, free from any non-essential (useless) thoughts. That is right diligence, great diligence. That is why the Buddha has infinite samadhi power. This is the result of his constant diligence and effort.

We must be diligent in our cultivation. When listening to sutras, we must not become drowsy or give rise to delusive thoughts, otherwise we will not be able to attain the fruit of the Way (enlightenment). Famous people in the world also depend on their diligence to achieve success. Therefore, in our struggle through life, we must fulfill the requirements of diligence.

Diligence consists of diligence in practice and diligence in principle. Most cultivators are diligent in practice and do not clearly understand what the “principle” is. What is diligence in practice? It is prostrating to the Buddha – prostrating a thousand times a day; reciting the Buddha’s name – thirty thousand, fifty thousand, or a hundred thousand times; reciting the sutras – ten chapters; or reciting the mantras ten thousand times or more. These are all diligence in practice. To attain our goal, we should be diligent in practice with perseverance and determination. If we do not have perseverance and determination, our mouth dries up after reciting the Buddha’s name for a short time, or we give up after reciting just a few chapters of the sutra. With this kind of attitude, it is not easy to attain the Way. We must not only be diligent in our cultivation, but to succeed in any pursuit in life, we must persevere. When one has a mind of perseverance, even those of low faculties can succeed. On the other hand, no matter how intelligent one is, one may not easily attain success. Therefore, in everything that we do, we must be diligent and never regress.

In Buddhism, there are many anecdotes about diligence in practice. The “Wax-Sunning Master” was one example. During the early Ming Dynasty, there was a bhikshu who was the sacristan of the Zen Hall. He was worried that the candles would become moldy, so he placed them under the hot sun in June. However, under the sun, the candles all melted into liquid wax. Later on, people called him the “Wax-Sunning Master.” Once, the Buddhist Institute was recruiting students and the “Wax-Sunning Master,” hoping to open his mind to wisdom, also wanted to study there. Although the Institute did not have any entrance requirements, because he was illiterate, he was not accepted. But he was very determined and continued to make prostrations, pay homage, and would not leave. Therefore the Buddhist Institute accepted him. After he entered the Institute, he gradually learned to read. When others were sleeping or resting, he would still be studying. Because he persevered and never failed to be diligent, he later became a great Dharma master, one with the highest achievement in the Buddhist Institute.

We must be diligent in our cultivation. When listening to sutras, we must not become drowsy or give rise to delusive thoughts, otherwise we will not be able to attain the fruit of the Way (enlightenment). Famous people in the world also depend on their diligence to achieve success. Therefore, in our struggle through life, we must fulfill the requirements of diligence.  Diligence in practice consists of thoughts moving unceasingly with attachment to objects, and the mind still in the midst of arising and ceasing. If we base the fundamental cause of our practice on the mind’s arising and ceasing, we will reap the fruits of birth and death in the future. Therefore, diligence in practice is still separate from the Way, so we should take a step further to achieve diligence in principle.

The Sutra of Complete Enlightenment states, “All Tathagathas originally arise from the causal ground.” “The causal ground” is the causal ground of the mind. The “root” is our fundamental inherent Buddha nature. With this causal ground as the foundation of our cultivation, this mind will constantly be free from delusive thoughts, not fall into confusion, and be master of itself. This is diligence in principle.

Diligence in Principle is to base the fundamental cause of our practice on a mind that neither arises nor ceases. We will then reap the fruit of freedom from birth and death—attain nirvana and enlightenment. What is freedom from birth and death? It is this very mind that everyone has. “The mind is Buddha.” When enlightened, this mind is the Buddha. Everyone has this mind. As soon as we are born we know this mind of pain, itchiness, tears, and laughter; it is not given to us by our parents, nor does it arise from our thinking or our practice; it is not given to us by anyone else, it is inherent in us. Even though we are now ordinary beings, if our mind does not give rise to defilements or have delusive thoughts, the bodhi mind will immediately manifest. Therefore, we must now practice not giving rise to the mind, not moving our thoughts, not clinging to objects, not being confused, then this mind is samadhi; we do not need to practice samadhi elsewhere; this mind is constantly clear; this is wisdom; we need not seek wisdom elsewhere. Because where there is seeking, there is gain and loss; where there is gain, there is loss; where there is attainment, there is loss: these are not inherent in us.

“Foundation” means the root. It is the fundamental inherent mind of sentient beings that is unborn and undying; it is the “fundamental cause of cultivation” It is this inherent mind that is the root of cultivation in the causal ground. When Shifu teaches the Dharma, if your mind that listens to the Dharma constantly maintains clarity, neither arises nor ceases—this is the “root.” (foundation). We need not look for it elsewhere. For example, contemplating the hua tou, giving rise to thoughts, reflecting, and contemplating the hua tou that neither arises nor ceases—this also is the pure Dharma body of Vairocana Buddha. This is the “fundamental cause of cultivation.”

The Sutra of Complete Enlightenment states, “All Tathagathas originally arise from the causal ground.” “The causal ground” is the causal ground of the mind. The “root” is our fundamental inherent Buddha nature. With this causal ground as the foundation of our cultivation, this mind will constantly be free from delusive thoughts, not fall into confusion, and be master of itself. This is diligence in principle. In the Shurangama Sutra, the World Honored One clearly elucidated the main condition for abandoning delusion and removing the true. “When cause and effect are the same, defilements are clensed/eradicated and one enters nirvana; untying our bonds by their roots, we are liberated from bondage and attain enlightenment.” Therefore, the causal ground of the mind is the stage of attainment/enlightenment. Practicing accordingly is diligence in principle, great diligence.

The ancients say, “all Dharmas flow from this source. All Dharmas return to the Dharma realm.” All Dharmas return to the Dharma realm of the principle. “Principle” is this mind that is unborn and undying, and awareness is always present. After practicing, one is not attached to the practice. In reciting there is no one who is reciting and nothing that is recited. Everything is always in one suchness. This is to practice without effort.

Practicing without Effort: Practice and Principle are in One Suchness

“Not giving rise to a single thought” is great diligence. When thoughts are produced, they will certainly be extinguished. When the mind that arises and ceases is the fundamental cause of practice, it is the expedient means of diligence in practice. For example, if we begin by reciting “Amitabha” and follow it with another “Amitabha,” then the first “Amitabha” is extinguished. Therefore this mind is always in the midst of arising and ceasing (birth and death) and the recitation of the Buddha’s name also arises and ceases. If we understand the truth of ‘diligence in principle,’ this mind will be free from birth and death. When we realize this truth, we should recite the Buddha’s name through principle. The reciting and what is recited are both empty. Even though empty, this mind is perfectly clear and lucid, in suchness and unmoving. This is “in every thought the Buddha is in the world.” This mind exists at every moment. Reciting this way is truly inconceivable. Reciting is the Buddha; not reciting is the Buddha. Reciting is the Way; not reciting is the Way. The mind is perfectly clear and lucid, and absolutely tranquil. This is the Buddha. This is true diligence.

Practicing without effort is great practice, great diligence. When we realize this principle, we will attain the birthless state. When we realize this principle, we will instantly attain the state of the sages. When we practice after realization, we can practice all virtuous dharmas and yet not be attached to them. This is to practice with non-practice; to be mindful of no-mind. This is the true cultivator. If we do not realize this principle, it is diligence in practice only, and we are still dwelling in the mind that arises and ceases. This belongs to the state of birth and death and will result in the retribution of birth and death. By planting the cause now, the retribution is in the future and not in the present; therefore one is always in the state of an ordinary being. The Buddha’s realm within the ten Dharma realms is “Utilizing the One Vehicle; all virtues are perfected.” “One Vehicle” is the mind that is unborn and undying as the cause of fundamental cultivation. Besides this, there is no second method. The Buddha cultivated for three asamkheya kalpas, beginning as an ordinary person, finally attaining supreme unsurpassed enlightenment, never straying from this mind. Therefore it is said, “A journey of a thousand miles is not separate from the first step.” Cause and effect are always one.

To realize the principle of no arising and no ceasing is to see our own inherent Buddha nature. Practicing according to this method is to practice with non-practice; it also is to practice without effort. At this time, any dharma we touch is the Buddha Dharma. Practice is principle and principle is practice. Practice and principle are non-dual. Practice and principle are one. If we only practice diligence in principle and are not diligent in practice, it will also be difficult to realize the truth. Therefore, in order to gain true benefit from our practice, we must be diligent both in practice and in principle. We must realize the principle, and cultivate the practice. When we understand this we should practice by relying on this true mind, constantly not deviating from this mind, then we will be able to attain the fruit of the Way in this life.☸︎