The Turtle And the Hungry Fox 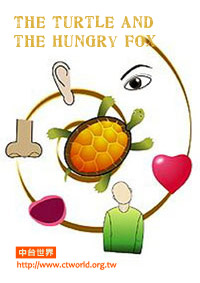 Long ago, when the Buddha was still present in this world, there was a monk who lived far away from the clamour of the towns and cities. One day, he came down to the riverside by the secluded forest in which he lived and sat down alone in meditation under a tree, with the hope of attaining enlightenment. Although he lived a very quiet life in this forest and appeared as though he had no cravings, in reality, the strong desires of his mind were always ready to make trouble for him. When he tasted delectable fruits and vegetables, drank sweet spring water, or enjoyed the surrounding beautiful scenery, he felt at ease and carefree. If he ever came across poor weather, or unsavory foods and drinks, he would become irritated, even to the point of blaming everyone and everything around him. His thoughts, always following the external world of form, sound, smell, taste and touch, continuously rose and fall like the waves of the sea. At times he would be extremely happy, at other times in states of deep despair, but all along he had no way of quieting his mind. And in this way, each day became the next, with springs departing and falls arriving, twelve years flew by. This monk had still not achieved the Dao, and because of this, many vexations arose in his mind. He thought: I am hardworking and diligent, why am I still just a common man?

When the Buddha knew it was almost time for this monk’s enlightenment, he appeared as a bhiksu and came to the forest to practice with him. One dark night, with the bright moon hanging high in the sky, these two monks became aware of a turtle climbing slowly out of the river onto the shore. At the same time, they also spotted a hungry fox quickly approaching from afar, in search of food. As soon as it caught sight of the turtle, the fox ran over, snapped opened its mouth, and prepared to bite down. At that moment, the turtle, in order to preserve its life, immediately pulled its head, tail, and four legs back into its shell. The fox used its front paws to overturn the turtle shell, but soon realized that it would be to no avail, and so had no choice but to leave. Once the fox had disappeared, the turtle, just barely managing to save itself from harm, slowly started to extend its head, tail, and four legs out from its shell, and eventually slid back into the river.

After witnessing this scene, the monk told the bhiksu, the Buddha in disguise, “Because this turtle had this life-protecting shell, the fox was unable to do any harm to it.” The bhiksu answered, “The people of this world are no match for this turtle! When the turtle is confronted with danger, he knows to retract his head, tail, and legs. However, worldly people are completely unaware that impermanence, a murderous ghost, is constantly watching them, wanting to seize their lives. Instead, they willfully indulge their six senses of eyes, ears, nose, tongue, body, and mind, in pursuing the six external sense objects of form, sound, scent, taste, touch, and phenomena. In turn, they perform all kinds of evil deeds and give the demons of vexation, death, and sickness opportunities to take advantage of them. In this way, they are driven by their karma, endlessly transmigrating within the six realms and suffering from all kinds of adversities. This is entirely due to their inability to master their own minds, giving rise to their continuous suffering in the cycle of death and rebirth.

Next, in order to counsel this monk, the bhiksu spoke the following stanza:

“Concealing the six like a turtle,
Guarding the mind like a fort,
Conquering evil with wisdom,
One will be triumphant and unharmed.”

After hearing this stanza, the monk fully realized the teaching, cut off all attachments to the six worldly sense objects, wholeheartedly absorbed himself in his practice, and not long after attained arhatship.☸︎

One’s practice needs to begin from the six senses, at all times turning one’s mind inwards. Usually, our six senses are always reaching out to the external world: the ears hear sounds, the eyes see objects, the nose smells fragrances, the tongue differentiates flavors, the body experiences sensations, and the mind thinks. But now, we want to turn around to observe ourselves, and ask: who is this that can see, that can hear? In actuality, lifting our hands and feet, or even raising our eyebrows and blinking our eyes, are all wondrous functions of our awareness. The awareness of ordinary beings and that of the Buddha are the same: they are both intrinsically pure and undefiled. But then, why are there differences between ordinary beings and saints? This is because common people take external phenomena to be real, and so give rise to greed, anger, and ignorance, thereby committing killing, stealing and sexual misconduct. This is the difference between them. If one can be constantly mindful, closely guard the entries of the six senses, often self-reflect, and let go of attachments; if one does not cling to external phenomena, and does not give rise to greed, anger, and ignorance; then one’s inherent compassion and wisdom will be revealed.