The Parrot Who Extinguished A Forest Fire 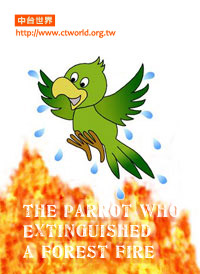 The Buddha was teaching in a village and told the following story. Once a bamboo forest was on fire, and it spread quickly due to the strong and dry wind. The flames swallowed up everywhere in the mountain jungle, and was about to swipe away all lives there. A parrot named “Joyful Head” was disheartened to see all the living beings having no way to escape.

So Joyful Head flew to the sea nearby, wet its small wings with the seawater, and flew back to spray the water drops over the flames. It flew back and forth endlessly, despite becoming very weak from the effort. Its determination and sincere, chivalrous act moved the heavenly king Indra.

“Joyful Head, with your tiny body, tell me how are you going to put out this wide and forceful fire?” asked the heavenly king. “My intention is even broader than the fire! If I am not able to extinguish the fire in this life, I vow to continue and put it out in my next life!” replied the parrot.

Indra was so moved by the parrot that he manifested his miraculous power to create a great rain and poured over the forest. Soon, all beings were saved.

The Buddha said, “this parrot was my past life, indeed, and all the birds and beasts in the jungle were none other than the villagers. The former me had rescued them by putting out a fire. In this life, I will extinguish all fires of anger, greed, and ignorance, in order to save them from suffering and attain peace. In their previous lives, the villagers had the remarkable opportunity to take the Five Precepts, therefore, they were able to understand the truth thoroughly today, and attained the sagely state of first fruit. ☸︎

Each of us has an ideal vision of how success can be reached. But success cannot be reached with any ideal short-cuts. Success is the result of the accumulation of each single step we take towards our goal. “There is no such thing as an impossible task. There is only the lack of determination and efforts.” Possibility is a function of our own hard work and perseverance.